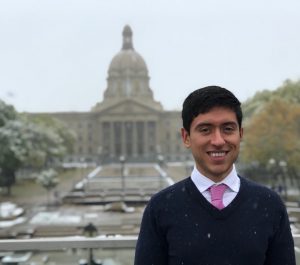 MacEwan University public relations student Luis Carlos Flores Aguilar is the 2018 recipient of the Torchia Scholarship in Public Relations/Communications. The scholarship is awarded by the Communications + Public Relations Foundation to a communications student studying public relations in either French or English, and that is not their first language or mother tongue. Originally from Veracruz, Mexico, Luis Carlos also has a degree in petroleum engineering and a diploma in project management.

Luis Carlos first started learning English at a private school in Mexico, but knew he needed to learn more when he first arrived in Canada and was taken aback at how quickly everyone spoke. Under a visitor visa at the time, he was not able to study or work, and so would go to the public library to read and attend free English classes, which he continued until his acceptance into the MacEwan University public relations program in September 2017.

As a CPRS Edmonton student member, Luis Carlos was part of the mentorship program where he was paired up with Jamie Ausmus. The mentoring and networking opportunities provided by both CPRS and the PR program allowed him to meet his current boss at the Government of Alberta, where his current role as a communications intern in Economic Development and Trade allows him to combine all his skills. “I’m using my English and Spanish, petroleum engineering background and PR knowledge. Everything has come full circle and in any other discipline, I don’t think I’d ever have this opportunity.”

Always curious, Luis Carlos said he asked a lot of questions as he studied at MacEwan. For those looking to enter communications and public relations where English is not their first language, he reinforced that it is going to be twice or thrice the effort. Whether it’s stopping when you’re reading textbooks to look up words, asking professors what something means during an exam, or finding a classmate to go over slides, “I always asked, and I never felt left behind.”

Luis Carlos discovered the Torchia Scholarship through the monthly CPRS e-newsletter. Who was the first person Luis Carlos told when he found out he’d won? His partner. “We were getting ready to go to work in the morning, and I showed my partner the email – we couldn’t believe it! Making my family here and in Mexico proud has been my biggest motivation. I was incredibly excited to share it with them.”